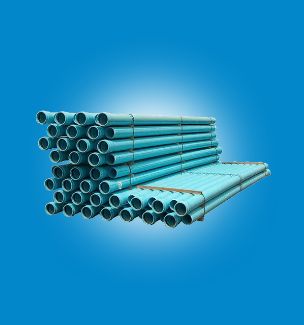 Vinyl uPVC Casing & Screen Pipes has a higher density than water that provides a clear advantage in good construction. Its yield stress of 55Nlimm is comparatively high. The modulus of elasticity is also high enough to achieve excellent stiffness in pipes preventing undesired deformation of the pipe.

PVC-U, unplasticised polyvinyl chloride is an ideal material for manufacturing well pipes as it is impervious to corrosion and chemical action, easy to handle and install, light in weight, non-toxic, non-conductive. Its long service life makes it an economical choice over other materials.

The possible production capacity of a well basically depends on the following factors:

PVC-U Well Casing and Screen pipes for Water Well Construction
Water covers almost three quaters of the earth’s surface and a major portion of this is found in the oceans or frozen in the Polar Regions. Only a small percentage of fresh water is available as surface water in lakes, rivers, streams and as ground water. Ground water is the nite source and it must be exploited very carefully.

The past fifty years witnessed a global expansion of the water well industry particularly as extraction of water from the wells has become lifeline of industry, agriculture,and drinking water supply in cities, towns and villages.

Well construction products, therefore, play an important role to ensure the highest quality, efficiency and screens were the natural choice of well design engineers and drillers. However this material was not always found to be suitable, particularly in conditions where rapid corrosion of rapid pipes, deterioration of screens or formation of bacteria resulted in abandonment of the well and worse stillto contaminates the store.

PVC-U has higher density then water that provides a clear advantage in well construction. Its yeild stress of 55N/mm is comparatively high. The modules of elasticity is also high enough to achive excellent stiffness in pipes preventing undesired deformation of the pipe.

PVC-U is resistance to all substances dissolved in naturalground waters.PVC-U is also resistant to aggresive and highly concentrated acid and salts. Its resistant covers a pH range of water between 2 & 12, due to which the chemical used, for cleaning, devloping and regenrating the wells (both organic and inorganic) do not aect the PVC-U well pipes. PVC-U is completely resistant to bacteria in water and soil.

Tensile Strength
The tensile strength required can be calculated on the basis of pipe weight. In addition to the pipe weight, gravel that gets suck on the joints during the assembly and settlement phase should be considered in design calculations. The lower load bearing capacity of screen pipes with slots should be considered when the scree nular spaces, developing the well or when pumping (due to large differences in water level). The eect of such pressures cannot be precisely determined. When sinking pipes through clay layers, additional compressive forces are exerted due to swelling clays. This can happen at any depth and in extreme cases may cause considerable strain on the material surface. The values indicated in the tabels of this broucher are based on the minimum wall thickness of the pipes, their diameters and material composition.

Impact of Temperature
Temprature conditions prevailing during the laying of PVC-U well pipes will inuence the mechanical properties of the material. High temprature between 30° C and 40° C as indicated by the creep strength in realtion to time, the PVC-U material properties provide sucent safety factor for the intended use. It is however important to determine te other inuences while encasing the well pipes with concrete to seal the drill holes. Temprature increases can b caused by the hydration heat of concrete. Calculations however show that these tempratures do not normally exceed 15°C, with the temprature of unset concrete reaching approx. 18°C, the temprature within the seal will be slightly more than 30°C and that is within the optimum limits.